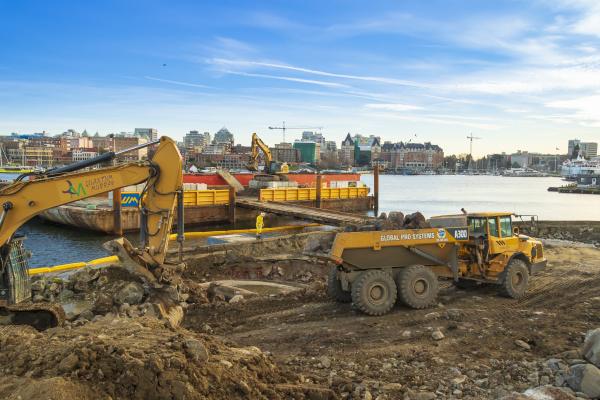 SLR was the lead consultant for the development and implementation of a comprehensive risk based remediation plan for this unique site nestled between the iconic Laurel Point Inn and the Pacific Ocean in picturesque Victoria Harbour.

Middle Harbour was occupied by the British American Paint Company (BAPCO) from 1906 to 1972/1976. Operations at the paint factory included the manufacturing of paints, varnishes, and lacquers. Paint and raw products were stored at the site in underground and above ground storage tanks, and reportedly discharged directly into the marine environment. In addition to sources of contamination associated with operations at the paint factory, the site has been periodically infilled with a variety of materials.  Prior to the paint factory’s presence, the land was also a First Nation’s burial site as part of the traditional territory of the Songhees and Esquimalt First Nations.

In the 1980s, the area was transformed into a park and green space.  However, the transformation into a park had only cosmetically changed the sites appearance with a clean soil cap, as significant contamination issues remained buried below the surface.

SLR designed an innovative remediation plan that developed site specific risk based standards which allowed effectively addressing the contamination presenting risk to human health and the environment. The cleanup of the former paint manufacturing property involved removing some 35,000 m3 of soil contaminated with pollutants such as polychlorinated biphenyls (PCBs) and leachable metals exceeding risk action levels and subsequently revitalizing the area with new soil, grass, grading and contours.

Transport Canada will be transferring the land to the City of Victoria, whereby the new three-acre Laurel Point Park will be undergoing an exciting redevelopment for the community starting this fall.